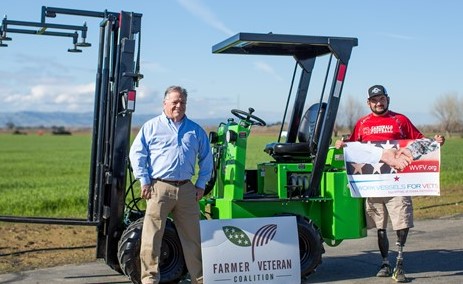 Work Vessels for Vets, Inc. announces the award of an adapted forklift to a severely injured Army veteran of 4 combat tours in Iraq and Afghanistan.  The $30,000 specialized forklift was purchased in collaboration with The Farmer-Veteran Coalition and The Semper Fi Fund and was presented in California recently, just in time for the bees to get to work in the almond groves.

After stepping on an IED in Afghanistan and losing both of his legs, Army Staff Sergeant (SSG) Alejandro Jauregui had to find a new passion to pursue.  Working in the fields since childhood in a small agricultural town in Northern California, SSG Jauregui understands the important role that honey bees play in producing healthy crops.  He started Fury Bees not long after his recovery from severe injuries.  Fury Bees began operations in March, 2015 with just 100 hives. Today, Fury Bees has over 500 hives that are rented out to the almond, fruit tree and other growers in the fertile Salinas Valley of California.

Alex was born in Guadalajara, Mexico on April 12 1985. When he was three years old his dad moved the family to Williams, CA where Alex grew up. When he was only eight years old his dad died in fatal car accident, he was then raised by his mom. Alex graduated high school and decided to join the military as a wheeled vehicle mechanic.

Shortly after bootcamp and mechanic’s school, Alex was off on his first tour was in the Baghdad area from June 2005 to June 2006. His second combat tour was in the Andar province from September 2007 to December 2008. During this tour, Alex’s convoy was hit by an IED, which killed a fellow comrade. Alex decided that day to reclass as an infantryman and was assigned with B Co 2-508th PIR 82 Airborne Division, with whom he would do an additional two deployments to Afghanistan, for a total for 42 months of combat.

On April 8, 2012 while out on patrol, Alex stepped on an IED and as a result lost both his legs, two fingertips on his right hand and shrapnel wounds to his right forearm and most of his hearing on his right side. Alex recovered at Walter Reed Medical Center in Bethesda, MD and was medically retired in 2014.  He returned to his family and farming.

“Michael O’Gorman, founder of the Farmer-Veteran Coalition, based in California, contacted Work Vessels for Vets to see if we could pool funds together to help SSG Alex with the expensive adaptive machine he needed,” remembered Cathy Cook, Executive Director of Work Vessels for Vets.  “We had just received an unexpectedly large grant from Eagles rocker Joe Walsh’s VETS AID Concert so I immediately committed these windfall funds to the collaboration.”

By working together, with $10,000 from Work Vessels for Vets, $10,000 from Farmer-Veteran Coalition, and another $10,000 from the Semper Fi Fund these dedicated organizations were able to reach the goal of $30,000 to purchase the specialized forklift for Alex.

“This brilliant pooling of funds to help a deserving hero is a demonstration that there are upstanding veteran-serving organizations who are ready to help.  Work Vessels for Vets is delighted to be a partner in this effort,” Cook noted.  “We thank Joe Walsh’s VETS AID for the grant funds to Work Vessels for Vets, Michael O’Gorman of The Farmer-Veteran Coalition, and The Semper Fi Fund for working together to make a life changing difference for this veteran-entrepreneur.  Huzzah!”

Work Vessels for Vets, Inc. equips America’s returning veterans with the tools they need to start a business.  Learn more at www.WVFV.org    The Farmer-Veteran Coalition offers training, resources and an annual grant program to assist returning veterans who wish to pursue careers in agriculture.  Learn more about their programs and many state chapters at www.farmvetco.org

The Semper Fi Fund provides immediate financial assistance and lifetime support to combat wounded, critically ill and catastrophically injured members of all branches of the U.S. Armed Forces and their families to deliver the resources they need during recovery and transition back to their communities, working to ensure no one is left behind. Go to www.semperfifund.org.